Wits and Tuks in university rivarly

Wits and Tuks in university rivarly 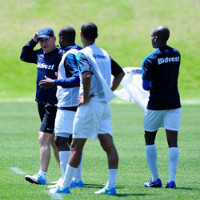 It is not a Varsity Cup match nor is it a tussle between the University intellectuals. Instead it is a competitive Absa Premiership match as Bidvest Wits host the University of Pretoria at the Bidvest Stadium on Wednesday night, kick-off at 7:30pm CAT (SA, GMT+2).
Only a point separates these two sides on the log standings.
Tuks are occupying fifth place on the table with 17 points from their 12 outings. The Johannesburg outfit, on the other hand, have accumulated 16 points for their seventh place positioning after four losses, four draws and four wins each.
Steve Barker’s charges, though, have been the surprise packages of the season so far. Having gained promotion at the start of the season and competing in their maiden top flight season, Tuks have registered four wins, five draws and suffered just two loses.
They have held major sides like city neighbours SuperSport United and Mamelodi Sundowns to league draws and claimed the biggest upset of the season thus far when they beat Moroka Swallows away.
Tuks’ charismatic captain Tebogo Monyai has underlined the importance of his side going into the mid-season break with momentum and being nicely placed on the log standings.
“We are targeting 25 points before we go onto the Christmas break. We know that we started the season well and surprised a few people, but we have not got maximum points in the last two matches and it is something that doesn’t sit well with the team at the moment,” explains Monyai.
“We are a bit concerned with our form, but we are confident of overcoming it. We need to redeem ourselves and lift our confidence.”
Monyai stressed that he would have loved to have faced the Clever Boys at the height of the school calendar year where this fixture would have been at the tip of every student’s tongue on both campuses.
“It would have made sense to play this match in the middle of the year where we would have gotten a lot of student support,” adds the Tuks captain.
“Most students have finished their final exams and aren’t around and those few who are still around are probably still studying.
“This is the one fixture that we do not want to lose. We looked at the season calendar and signalled it out because of the fierce rivalry between the two organisations.”
Wits under the tutelage of Spaniard Antonio Lopez Habbas have blown hot and cold this season and the Clever Boys are desperately clinging onto a position in the top half of the table after a 2-0 loss to Orlando Pirates in their last league fixture.
Wits’ utility defender Siboniso Gumede knows the importance of securing a victory over Tuks. The defender says that his side are in a period of transition and need just one victory to start putting together a series of three pointers under their belts.
“We acknowledge that we have not been getting the desired results the team needs, but a win against Tuks is compulsory,” said Gumede.
“We want to finish the year on a high and place ourselves in a good position heading into the second round of the league which is always the toughest period in the season.
“We are not far from the top teams in the league because a string of victories can see us challenging for the top four spot,” concluded the Wits man.
Article source: SuperSport

ADFA awards local filmmaker with a bursary for undergraduate study