The Beginner's Guide to Roommates in Res or in a Digs

The Beginner's Guide to Roommates in Res or in a Digs

Written by Kaitlyn Kochany of Huffington Post
When I was 20, I moved into a student house. There were 15 of us, spread out over three floors and a patchy backyard. We shared one kitchen, scrambling between four fridges stocked with an abundance of leafy greens and bricks of cheese. The freezers overflowed with frozen pizzas and popsicles (hey, we were students). There was one TV, one DVD player, and one old-school Nintendo system. The end of each term brought a new crop of housemates — foreign exchange students drawn to the short-term lease, city kids who had outgrown their parents’ houses, and kids like me, who can moved to the city for school, but ended up learning way more about human nature by living with dozens of housemates through the years.
I’ve lived with wonderful people. I’ve lived with jerks. I’ve lived with people who have stayed sequestered in their rooms for most of the year, people who came drunk at 4:00 a.m., folks who smoked all manner of illicit and ill-smelling substances indoors, and one memorable girl who let her pet rabbit poop all over the kitchen table. I’ve learned from all of them.
I was in the unusual position of not having a choice in who lived with me — housemates were assigned seemingly at random by the student housing administrators. If you’re lucky enough to choose your roomies, you may find that the issues which threatened to tear my house apart will be muted, or never show up at all. Then again, you may find yourself with rabbit poop all over your kitchen table. 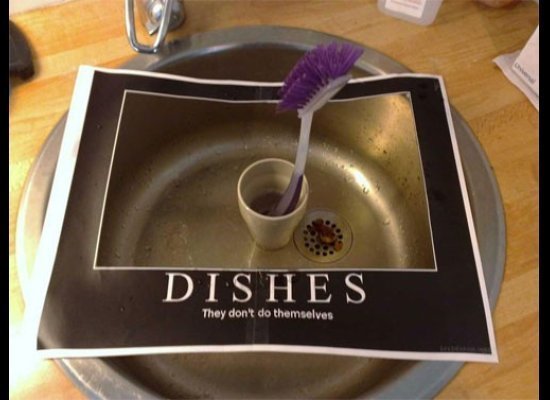 Talk to your roommates. Do this at every opportunity: when you interview them before they move in, when you come from work, and when they do annoying stuff. The urge to ignore problems in the name of “keeping the peace” can be incredibly strong, but problems are usually best dealt with when you address them quickly and directly. Annoyed that your roommate never takes out the garbage? Irritated by beard trimmings all over the bathroom sink? Say so. By addressing each incident in the moment, you avoid having a blow-out with a litany of complaints six months down the road.
Cultivate a house where people talk to each other. Housemates aren’t always friends, but everyone should feel safe and respected when they approach a roommate. If you’re on the receiving end, feel free to tell someone that you can’t talk right now — you’ve just gotten home or you’re heading out the door — and ask if you can sit down in the next 24 hours. Keep your tone neutral, and try to avoid getting defensive or aggressive. If you’ve made a mistake, apologize. Talking = working through the issue = good.
That said, avoid emails and notes. Notes, unless they apply to everyone in the house on the same level (“FYI: plumber coming to fix sink”), often aggressively single one or two housemates (“Paula and Jamie: DO YOUR DISHES!!”). Email is more private, but both suffer from a lack of tone-signals: what we send out as neutral is often perceived as hostile. Avoid this and talk to people directly.
Make rules. Things like cleaning schedules, financial transactions, and quiet hours need to be talked about with everyone. You might need to schedule house meetings if you have a lot of housemates, or you might need to grab a drink with your roomie on the fly and hash things out. Write this stuff down and post it on the fridge. Refer to it. Ask your guests to respect them. Revisit your rules when new people join your household, and rework them if you need to.
Common areas like kitchens, gardens, and bathrooms create the most conflict, so pay special attention to them when you write up your house rules. Scheduled cleaning days might seem like a drag, but it also creates a sense of accountability — plus, house bonding! Splitting chores can work (I’ll always empty the dishwasher if you always tidy the front hall), as can asking the question, “Hey, just how messy are you?” when you first meet your prospective roomie.
They say that 90 per cent of life is showing up; that counts double with a rent cheque. If you can, pre-write cheques to whomever handles the finances. Be prompt paying for rent, utilities, Internet, cable, house food, and other expenses. Rates tend to increase every year, so be prepared when your roommate tell you rent has gone up a few dollars. If you’re late with your rent (a huge no-no, by the way), cover the late or NSF charges, or avoid that altogether by being early with kind of stuff. There’s nothing as fraught as negotiating finances, and having to chase the money makes everyone feel like a jerk.
On a serious note, mental health issues often rear their head in our 20s and early 30s — the time we’re most likely to live with others. Symptoms of addiction, depression, eating disorders, anxiety and others often come through in incredibly anti-social behaviour, making those folks difficult to tolerate. I’m not advocating for you to take on your roommate’s alcoholism, but if you see a pattern that makes you worry, reach out if you can. I’ve lived with some deeply troubled folks, and it can be extremely tough on everyone day-to-day. There are resources. Use ’em.
Some houses are tiny — a couple friends sharing a teeny little walk-up — and some houses have 17 people living together. If you choose to live with others, be discerning about who you invited into your space. That runs in reverse, too; you don’t need to move in with the first person you meet. Finding yourself a good match in your roommates isn’t lucky — it’s a result of hard work. When you come out the other side, you’ll have stories about good friends, mortal enemies, and a rabbit that pooped all over your kitchen table.
Article and image by Huffington Post
​
article |
Previous