For the first time a South African university has an app on iTunes – and the bragging rights belong to Stellenbosch University (SU). SU’s Department of Journalism has just launched the SMF2012 app – a digital extension of its well-known final-year magazine, Stellenbosch Media Forum (SMF).
“SMF has been around for over 10 years, but in light of changes in technology and the media, this year’s editorial team decided to venture into new territory. We produced an app version of the publication in collaboration with Media24,” SMF Editor Christa Rohwer said.
Ryk Benadé, head of digital magazine production at Media24, says the app helps to “translate the content into another medium.” He and his colleague Luke Edward were responsible for the development of the app. 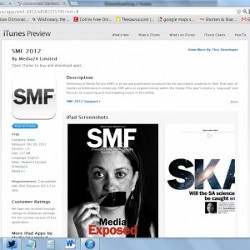 Dr Gabriël Botma, head of Journalism at Maties, has welcomed the initiative. “We are very proud and excited about the app, and congratulate the SMF team and our partners. This project shows that the next generation of journalists is ready and prepared to take on the future of digital publications, which still holds a lot of uncertainty.”
SMF explores trends within the media. This year’s theme is “exposed” and all the content relates to this theme. It covers a wide range of topics – from China and Africa to the Square Kilometre Array, satire and “The Spear” painting. The current issue also features profiles of the cover personality, City Press editor Ferial Haffajee, and Noseweek editor Martin Welz.

Journalist Willemien Brümmer, who supervised the production of this year’s SMFin her capacity as the current Rykie van Reenen fellow at the SU Department of Journalism, considers it “one of the most sensational editions ever.”
“The magazine is controversial, cuts deep and does what good journalism should do – it scratches where there isn’t necessarily an itch,” she said.
The SMF2012 app includes all the original content featured in the magazine, plus extra such features as a behind-the-scenes video of the cover shoot, exclusive videos and a number of photo galleries.
SMF2012 can be downloaded from https://itunes.apple.com/us/app/smf-2012/id581231745?mt=8 – for free at the moment, though there may be a minimal charge in future if the demand is very high.
It is possible to download SMF2012 on a PC, using an iTunes Store account, but for use on a tablet computer it must be installed on an Apple iPad because it has not been built for the Android operating system.
Benadé says the “digital realm is definitely a massive part of our future”. Botma agrees. “If there is one thing the last few decades has shown us, it is that technology makes jumps that no-one can foresee. But what is sure is that journalists and educators will have to stay ahead of the game – and apps are the way to go.”
Having notched up South Africa’s first university-linked app on a leading platform, it seems that SU’s Department of Journalism is doing just that.
Article Source: Stellenbosch University