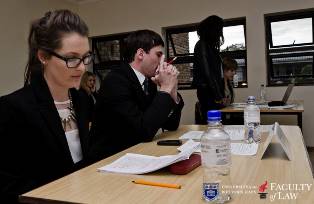 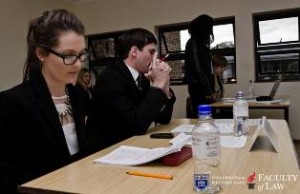 After being selected as the top internal moot students at Rhodes University in March this year, Harrison and Mardon were sent to compete as representatives of the Law Faculty.

Standing against law students from across the continent, Harrison and Mardon had to create two arguments, one for imaginary state Khalaharia and another for fictional non-governmental organisation Children of Africa Now (CAN!) in a case that concerned asylum seekers’ rights.

“Jarryd and I both felt like fish completely out of water because both of us are going to be working at corporate firms and this was about human rights which is completely the other way,” Harrison said. “Plus, at Rhodes, African Human Rights is an elective so neither of us had actually done it.”

Despite feeling as though they had a lot to catch up on, Harrison and Madron agreed that their success regardless was a tribute to the training received at Rhodes during their LLBs. “We emerged knowing that at least Rhodes has equipped us with the skills to go any direction that we want,” Harrison said. “You can read up on the law but the groundwork of that training is the most important.”

Arguments at the competition took place in English, French, and Portugeuse, with Mardon and Harrison placing eighth among the 37 Anglophone countries. They also walked away with the Best Memorial Award for the excellent standard of the heads of argument they drafted, an award both were very proud of, given that drafting heads will be a central part of the career paths they have chosen going forward.

“We are both going in to commercial firms so a lot of what we’ll be doing is drafting for advocates that will then argue based on our heads,” Mardon explained.

Both Rhodes representatives also greatly appreciated the opportunity to speak with the judges of the competition in between rounds and felt they learnt greatly from this interaction with lawyers at the pinnacle of Africa Human Rights law.  “One of the judges said he could see we were a little shaky on the human rights front, but that we were good mootists which was great for us,” Harrison said.

Their most positive experience from the event, however, was the interface facilitated between students from different universities across Africa. The conversations took place both throughout the competition as well as during numerous social events, such as cocktail dinners and trips to Robben Island.

“It was really great, for example, meeting the Egyptian team because there is obviously a lot of turmoil there so it was interesting hearing what it was like for them,” Mardon said. “It was good to get insight in to different ways of life. I would say that is the thing I enjoyed most.”

Supervising professor, Associate Professor Laurence Juma, expressed his pride in the team: “Jarryd and Tammy had worked so hard and I am more than pleased that they emerged winners. This is a wonderful achievement and it goes to confirm our reputation of being one of the strongest mooting faculties on this continent.”

Students – it is time to get apped!