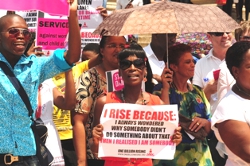 They came from all of Wits’ five campuses to say enough is enough. Wits Rising, the Wits leg of the One Billion Rising campaign, saw hundreds of staff and students gather outside the Piazza on Thursday, 14 February 2013, heeding the call to Rise, Strike and Dance to demonstrate their outrage against rape, violence and other crimes committed against women and children.
The one-hour programme offered profound speeches on human rights, activism theatre and entertainment in the form of dance and poetry. In addition to the Vice-Chancellor and Principal, Prof. Loyiso Nongxa speaking about the role of higher education in turning the tide on gender-based violence, crowds heard words from the SRC, gender activist and One Billion Rising campaign speaker – Prof. Pumla Gqola, and Unions. They were joined by actress and Aids Ambassador Hlubi Mboya and Andisiwe Kawa, a rape victim and activists.
Sibulele Mgudlwa, President of the SRC said it was outrageous that people had to organise themselves to do something that should be natural – speaking out against the violation of rights and freedom of expression. He also lamented the society’s indifference and said the problem does not lie with not the perpetrators of violence but with individuals.
“Through our silence we have allowed ourselves to be responsible for the atrocities that happen. Our passiveness and lack of will drives and fuels this global issue (rape and violence). More
Reading the University’s statement, Nongxa said: “There is deep shame in the knowledge that a woman in raped every four minutes in South Africa and that Interpol has named South Africa as the rape capital of the world.”
He emphasised that Wits does not tolerate any form of violence and that South Africa should act swiftly to end the brutalisation of women. emphasised that Wits does not tolerate any form of violence and that South Africa should act swiftly to end the brutalisation of women. Click here for the University’s statement on the matter.
Dr Kellie Gillespie, received great appreciation from the crowd when she delivered “Still I rise”, a poem from Maya Angelou about overcoming oppression, racism, criticism, sexism, and personal obstacles with pride and grace.
The event culminated with Witsies being drawn to sing and dance to the One Billion Rising anthem, at first with egging from the ThembaLab group, however within moments many others willingly joined and lost themselves to the thumping and cheer.
Article source: WITS University