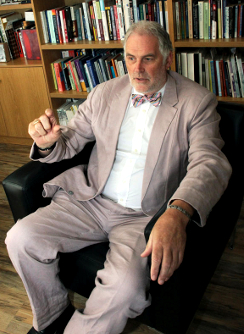 The UCT Graduate School of Business (GSB) has been re-accredited by the prestigious European Foundation for Management Development (EFMD). This means that the school has the stamp of approval of the European Quality Improvement System (EQUIS), the leading international system of quality assessment, improvement, and accreditation of higher education institutions in management and business administration.
The UCT GSB was the first school in South Africa to receive EQUIS accreditation back in 2002 and is one of just two schools in South Africa and 140 schools worldwide to have this endorsement. Schools need to re-apply for the accreditation every three to five years so to ensure that standards are maintained and that they are on an upward trajectory.
According to Director of the GSB, Walter Baets, the accreditation is significant. “Receiving EQUIS accreditation gives students and employers the assurance that the business school is among the best in the world and that its qualifications continue to be of the highest international standards,” he says.
He says that EQUIS, as recognition of quality, has important implications for all customers of the business school: “Prospective students and companies want to know that the business school they select has international recognition.”
Baets says that the school has seen in recent years that accreditations and international rankings are increasingly important factors to prospective students, especially foreign students, of which the GSB has a growing number. “The GSB aims to raise the profile of emerging market business schools as centres of excellence and thought leadership, and to provide local and international students with the skills they need to take on the challenges of this decade’s emerging markets,” he says.
EQUIS stands testament to the degree of successful change and innovation that has taken place at the GSB in the last few years. In the past three years the school has launched several new initiatives designed to make the school more relevant and responsive to the challenges of emerging markets. These include the Bertha Centre for Social Entrepreneurship and Innovation, the Allan Gray Centre for Values-based Leadership and the Social Innovation Lab, a stream of the GSB MBA.
Baets added that the accreditation process itself is demanding and rigorous. The school had to prepare an extensive self-assessment report analysing every aspect of its operations and undergo a four-day peer review in December last year.
“The business school had to submit a detailed report that covered ten areas of operation and this was followed by a visit by an international team of highly respected senior business school leaders, which involved the presentation of documentary evidence by the UCT GSB and in-depth interviews with its board, heads of departments, junior staff, alumni and students,” says Baets.
EFMD is Europe’s largest network association in the field of management development. Its fundamental objective is to raise the standard of management education worldwide. EQUIS facilitates standard setting, benchmarking, mutual learning and the dissemination across borders of good practice.
In 2012 the GSB also received AMBA accreditation. In order for it to become a triple-crowned business school it needs an accreditation from The Association to Advance Collegiate Schools of Business (AACSB), which it is currently applying for. Out of 13 670 schools offering business degree programmes worldwide, only 57 are triple-crown accredited.
“It is our goal to be triple crowned. And there is a good chance that we will be if the feedback we received from EQUIS is anything to go by,” said Baets.