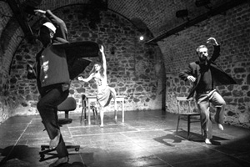 Triumph: UCT drama students received standing ovations for their performance in Brothers in Blood at this year’s Setkani/Encounters Festival. In picture are (from left) Daniel Richards, Tarryn Wyngaard and Matthew Trustham.

UCT drama students have returned triumphant from the 2013 Setkani/Encounter Festival in April in the Czech Republic. The group’s entry was an adaptation of prominent SA playwright and drama alumnus Mike van Graan’s Brothers in Blood.

The Setkani/Encounter Festival is hosted by Theatre Faculty JAMU (Janacek Academy of Music and Performing Arts) in Brno. The event brings together professionals and students from theatre schools from around the world.

Twelve schools participated in the event with student performers from countries such as Slovakia, the Czech Republic, China, and Mexico.

After many years of professional acting, dancing and choreographing, Kweyama returned to UCT to pursue a master’s in theater making.

“I wanted to combine my experiences of dance and drama and this adaptation of Brothers in Blood is part of my research into that field. It was also my first experience as a director,” he said.

Kweyama credits the group’s success to the department’s staff and students and to Associate Professor Christopher Weare in particular.

“Winning this award has been amazing. It has encouraged me to continue along the path I’ve embarked on,” added Kweyama.

Promise Nhlapho with the NYDA Executive Chairperson, Yershen Pillay at the launch of the Thusano Fund in Soweto