Talented young filmmakers get us talking about mental health

Talented young filmmakers get us talking about mental health

Pharma Dynamics – one of South Africa’s leading suppliers of CNS (central nervous system) medication – has again joined forces with the Film Industry Learner Mentorship (F.I.L.M.)  programme and the Mental Health Information Centre (MHIC) at Stellenbosch University to get the country talking about mental health conditions, which affect millions of South Africans, many of whom go through life undiagnosed and untreated.

This year, about 40 interns at F.I.L.M. – guided by MHIC experts – have made striking and emotionally charged short films for the “Let’s Talk” campaign around the following critical challenges in South Africa:

The interns, who hail mostly from previously disadvantaged backgrounds, worked in teams to create eight short films – all with different themes, plots, genres and points of view so that viewers will no doubt find a story that they can relate to. 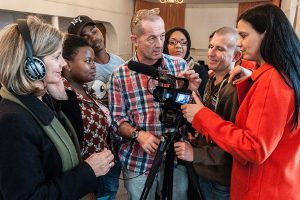 “Move”, for example, tells the story of two men with PTSD, one of whom was a former policeman who lost his legs and friends in a tragic and fatal car accident and the other who was almost murdered during a home invasion. Now, they have found relief and solace in interpretative dance by performing a haunting pas de deux at a studio in Cape Town.

In “Ice Cold”, a priest and a tsotsi both deal with the mental fallout and PTSD following the shooting of an innocent young girl in a township hijacking. Other films tackle the burdens of being a teenager, the aftermath of rape and effects of unemployment.

All the films have been posted on YouTube (search for Let’s Talk Mental) and viewers are welcome to discuss the issues they contain and vote on the ones they find most useful or relevant.

“We decided to use short films that incorporate young people in situations and real-life places they can relate to as a starting point to a bigger discussion on mental health issues,” says Mariska Fouché, public affairs manager for Pharma Dynamics.

“Getting sufferers, friends, families and communities to talk about their perceptions of issues like depression and youth suicide is the best way to start addressing stereotypes, encouraging treatment and getting all those affected on the road to recovery.”