Singh Nets Five Awards in the School of Health Sciences 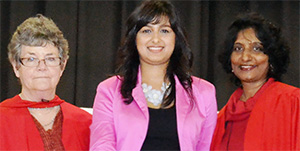 Singh Nets Five Awards in the School of Health Sciences

Bachelor of Pharmacy student, Miss Reeya Singh completed her degree as top student at UKZN’s School of Health Sciences.  She also walked away with five awards out of seven in the Discipline of Pharmaceutical Sciences.

In 2012 Singh was inducted by UKZN’s Golden Key International Honours Society at a ceremony held on the Pietermaritzburg campus. She was a third-year Pharmacy Degree student with a cumulative percentage average of 87 percent.

Singh was the best first-year student within her field of discipline and received a Dean’s Commendation Award in all her semesters along with various merit certificates.

Singh said she was so excited to find out that she is the top student in the School. ‘I am so happy, I was not aware that I did so well.’