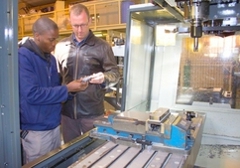 After 15 years’ hard work and a lot of sweat in advanced manufacturing training, the Engineering Faculty of the North-West University’s Potchefstroom Campus has now been appointed as the first tertiary institution that is involved with the practical training of students of the NTIP (National Tooling Initiative Programme). The NTIP is an initiative that is funded by the government and which trains craftsmen as toolmakers.

According to Prof LJ Grobler, Dean of this faculty, the faculty made funds and resources available to the NTIP for advanced manufacturing training. The students who benefit from this are students who are trained as toolmakers. “Our training is now integrated as the final level of a certain training curriculum of the NTIP training programme. Over the past few years we started the Centre for Advanced Manufacturing (CFAM) with its specialised equipment and laboratories. The Centre has already achieved many successes, amongst which, South Africa’s first locally manufactured twin-screw extruder. The government noticed our expertise and has just made funds available to launch the country’s first tertiary pilot project of its kind.”

He says the aim of the government’s Skills Development Programme is to address the shortage in skills that South Africa currently experiences and thus also to reduce job losses. The massive needs in skills of industries will also be better addressed by this initiative.

The Department of Trade and Industry has just released a new list of scarce and critical skills, amongst which many that fall under the engineering and manufacturing industry. They are of the opinion that the shortage in skills remained the same over the past decade, and in some fields of study it even showed a bigger shortage. The country specifically has a massive shortage in trained tool-makers.

The NWU’s pilot project entails that 36 students attend an advanced course for three months. Besides the infrastructure and equipment needed for their training, the government funding also covers accommodation, transport and meals.

Danie Vorster, a lecturer in mechanical engineering, reckons the project also hugely benefits the industry. “The training is causing that the NWU’s relevance to the community and industry received a big push. The contribution that the NWU makes towards the training of these craftsmen will also be invaluable for the engineering industry, the private sector and government goals. This is a clear example that the government’s collaboration with universities will be to the benefit of everybody.”