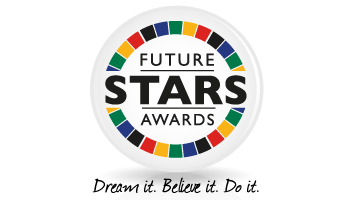 Invest in the future of South Africa’s Future Stars and Stars in Education, because later they will invest with you!
The future lies in the hands of the youth. The brilliant young minds who take charge today will be the pioneers of a brighter and better tomorrow. Sadly, of the 1.2 million children who start school every year, only 5% will complete a university degree. That’s why Argo is trying to inspire talented young minds to become Future Stars.
As a multi-media communications company, Argo is passionate about supporting  achievers and bringing lasting change through education and youth media. They’ve launched many education-focused magazines and handbooks and, living up to their brand values, Argo informs, involves and inspires more than 1-million top achieving pupils, students and the people who influence them.
Future Stars is Argo’s latest initiative targeted at aspirational youth under the age of 21, to motivate them to believe in themselves and in education’s power to help them achieve their dreams. With the massive 5 year success of Stars in Education, through which Argo recognises the most inspirational and dedicated teachers in the country, they decided to launch a campaign for the aspirational youth. Motivated teachers can only really make a difference when they deal with pupils who are inspired to learn.
Having someone who believes in you is a powerful motivator that gives you the support you need to realise your full potential. But so many of our young people don’t have the power of this support that keeps them working hard to build a better future, and sometimes it’s easy for them to give up.
That’s why Future Stars is recognising that the future stars out there – those learners willing to stand in lines that go on for kilometres in the blistering sun for the hope of a university education. By recognising their desire for a brighter future and believing in them – Future Stars is inspiring these learners to believe in themselves and how the power of education can help them reach their dreams.
Argo’s first five Future Stars winners are definitely lighting up the sky with hope for a brighter future – by dreaming it, believing it and doing it. Kimberly Roos dreams of becoming a successful actress and of owning her own production company that will create inspiring and entertaining content. Armed with her film degree, a never-give-up attitude, eagerness to learn and many bright ideas for future shows, she’s taking the
entertainment business by storm.
Combining his love for soccer with his degree in education that he’s working towards at Wits University, Mpfunzeni Makhanya has already started having soccer practice sessions with the kids in his community of Shakadza. He hopes to become a soccer coach and mentor young players of the future. Petrus Raltou from Pretoria is driven by his fervent ambition to become a successful entrepreneur. He’s currently studying accounting at Varsity College, attending workshops at a small enterprise development agency and spending his spare time doing further research into the field. Young Vredenburg High School student, and passionate family man in the making, Dean Dart is working hard to finish school so that he can go on to study political science and economics. As the first person in his family to ever finish school and attend University and be employed, English teacher Bright Khumalo dreams of starting a school where he can inspire the young
children who look up to him to make a better future for themselves.
Of the 216 entrants that submitted their Future Stars entries to SAstudy.co.za, these five Future Stars received the most votes from the public on the website. And simply by sharing their ambition for being Future Stars, each of these winners will be getting R10 000 to help make their dreams become a reality.
SAstudy.co.za is Argo’s premier information source and reaches more than 275 000 university students, high school pupils, parents and opinion leaders in South African education. It’s the perfect information hub for prospective students across beautiful Mzansi, offering them support with life skills, financial advice, institution information and course and career opportunities.
Argo is actively investing in the future of South African stars and, in doing so, is guiding the key market influencers. There’s no better way to build a brighter future for your brand than to support the youth and make a meaningful connection with your customers of the future.
For campaign sponsorship discussion, please contact Argo Sponsorship Manager Lauren Bright on 083 577 6622, or mail her at [email protected]
article |
Previous