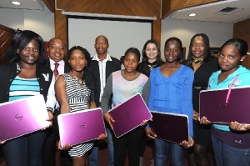 Five DELL Bursary holders: Beauty Makhado, Mollinah Chabane, Daphney Mabasa, Tendani Gabara and Mulalo Murendeni, were awarded a laptop each to assist them in their teaching, learning and research at the official handover which was held at the University Council Chambers on Tuesday, 16 July 2013. The beneficiaries received a full bursary from DELL which covers their tuition, books, accommodation, and their welfare. The Director of Communications and Marketing, Mr Takalani Dzaga welcomed the delegates.

The relationship between Univen and Dell started in 2002. To date, Dell has already invested personal computers and bursaries to the total value of R2 678,021.00. The SRC President, Mr Andisani Mathelemusa urged Dell to continue and sustain the relationship and that as the student leadership; their wish is for each student to get a laptop. 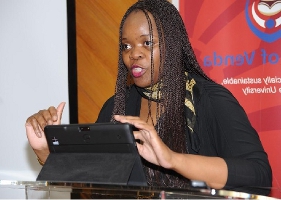 Dell was represented by Ms Chipo Msimanga who is Dell Accountant Executive. In her address, she appreciated the relationship they have with Univen. Ms Msimanga said, “we are living in a digital world, and that is the primary reason why we are equipping students with laptops. We want them to apply themselves in this digital world and to be able to use social networks, do their lessons and submit their assignments on time using their laptops. We already made an investment to twenty students that we have assisted through this programme at Univen. We appreciated the fact that learning has a strong technology focus, so we would like to empower our students that we support through Dell bursary programme”. Dell has one student, Ms Tshilidzi Makhado, from the University of Venda who is currently working as an intern within Dell South Africa. “We are very happy with the quality of work that she presents, showing that Univen produces quality graduates”, said Ms Msimanga.

The University of Venda was led by the University Registrar, Prof Edward Nesamvuni echoed the SRC President regarding the continuation of the relationship between the two institutions. Prof Nesamvuni mentioned that the University has functional laboratories that Dell is continuing to support. Bursary recipients, in response, were represented by Ms Beauty Makhado who promised Dell and Univen delegates to use the laptops in a way that those laptops will benefit even their communities. She further indicated that they regard DELL Company as their parents who finance their studies, and make sure they have books, food and clothes. Makhado also promised that as bursary holders, they will make sure that they excel in their studies.

Mr Dennis Malima, Head of Financial Aid proposed a vote of thanks. In his vote of thanks, Mr Malima reminded the recipients of laptops not to lend them to irresponsible people who could damage them and remove important functioning parts.