Connecting the lecturer to students 24/7 via Route Social Media

Connecting the lecturer to students 24/7 via Route Social Media 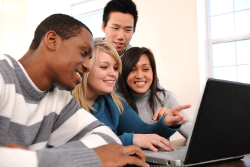 South African lecturers must adapt to the changing environment of their students by meeting them where they are most comfortable – in the social media space, an education expert says.

“Facebook and other forms of social networking media have become part of most people’s lives, and almost without exception part of the lives of the youth. They communicate, socialise, learn and entertain themselves through the internet and more especially using social platforms to connect to each other,” notes Madhav.

She says that while social networking sites create a sense of community, enabling users to engage, collaborate and share resources, using Facebook as a learning tool closely ties in with practices identified as highly beneficial in education, such as collaboration, engagement and interaction.

“The time has come for the role of the lecturer to shift from being deliverers of knowledge to being facilitators of knowledge-building and collaboration,” says Madhav.

She says that certain courses, for instance courses in photography, are particularly well-placed to benefit from social media tools which allow students dynamic interaction by sharing and critiquing their peers’ work.

“Too often, a technological chasm exists between academics and students due to the fast-developing and emerging technologies that tend to leave the ‘older’ generation in the wake of the younger,” says Madhav.

“In the past, the digital divide highlighted the gap between individuals and communities who had access to computers and the internet and those who did not. Today, the divide has shifted to represent the technological chasm between academics and students.”

Madhav says that research by the University of Cape Town identified the potential of Facebook in teaching and learning, but that there existed little experimental research on the use of these tools.

“The traditional belief is that the investment on infrastructure and technology is potentially prohibitively expensive. Often students are blocked from using social media, audio and video streaming sites due to bandwidth restrictions. And many academics share the view that social media is a nuisance as it distracts students from their real work.

“However surveys within The IIE has shown that the harnessing of social media in education can have a profound impact on educators and students. Yet there remains a chasm, with some students and educators embracing social media and others resisting change and developing negative attitudes.”

Madhav’s survey involved polling Digital Photography students and lecturers from The IIE’s Rosebank College. The lecturers were asked to instruct students on conducting research and sharing their own work as well as other digital artefacts with each other.

“The students clearly indicated that the use of social media took their learning experience beyond the lecture room into the realm of community learning,” says Madhav.

Feedback showed that students felt encouraged to share their skills and ideas online, whereas they would’ve been more reluctant to participate in the lecture room, or would’ve felt too shy to do so. Another important finding was that Facebook moved the learning beyond lecture hours, with collaboration extending past lessons into a 24/7 conversation.

“In order to embrace 21st century learning, educators must be prepared to make a pedagogical shift to include technology and create networked learning environments that harness collaboration, learner participation, problem solving, and the sharing of ideas,” Madhav says.

“In this way, the physical lecture hall can become part of a global network or community that helps engage and empower students to be enquiring and innovative on a playing field where they understand the game and rules of engagement.”