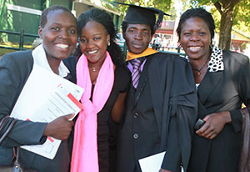 Mbofana said he had always been an A-student, even at high school in his home town of Harare where he completed his schooling at Zengeza High School. The initial challenge for Mbofana at university was getting to grips with studying in a foreign country. However, with the assistance of study groups he overcame his difficulties.

Mbofana, now pursuing his BCom Honours in Finance, completed his undergraduate education at UKZN with the help of a Zimbabwe Government Presidential Scholarship.

He said growing up in a large extended family motivated him to seek an education and excel. ‘To escape poverty, you need to get an education. You can’t blame politics for failing to pull you out of poverty, because if you’re not learned, how can you be employed?’

He said being a disciplined student instead of hanging out in bars and studying well in advance of examinations contributed to his academic success at university.

Mbofana, who at one stage contemplated a career in politics, plans on following a career in academia in the area of Financial Economics. He is passionate about research in this field and is presently doing his honours research dissertation on Stock Exchange Return Predictability within South Africa.

On completing his honours degree Mbofana said he would like to pursue his Masters degree at a European university or at a South African institution offering a Masters programme in Financial Economics.

To celebrate his academic success, Mbofana planned to spend time in Durban with his mother Mrs Taiti Mbofana and his sisters, Esca and Kwenda, who travelled to South Africa to attend the Graduation ceremony.

For more information on UKZN