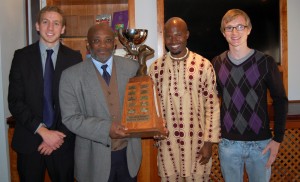 Wits, who were invited to the tournament after qualifying at national level, went into the tournament as underdogs but trumped the top dogs to claim the coveted title by out-smarting 30 top traditional university debating teams including those from Cambridge, Monash and the London School of Economics.
The Wits debating team are only one tournament away from being crowned the best debaters in the world if they can keep up their winning streak at the World University Debating Championships (WUDC) due to take place from 27 December 2012 to 4 January 2013 in Berlin Germany. Seven debaters from Wits will be flying the South African flag at the competition where they will meet competitors from Yale and Harvard universities.
The WUPID victory comes after a streak of spectacular wins by the Wits Debating Union. The Union successfully defended its title, for the third consecutive year, as the kings of Southern Africa when it beat 400 university students from the Southern African Development Community to take top honours at the National Universities Debating Championships held in July at the University of Limpopo.
Other notable wins:
Gauteng Provincial Champions from  2006 – 2012
African Universities Debating Champions in 2010
Best African team at the WUDC 2006 – 2010
For more information on Wits University, go to www.wits.ac.za

With this diploma you can help HIV/Aids get to zero