"Matric camp was hard but it was worth it" 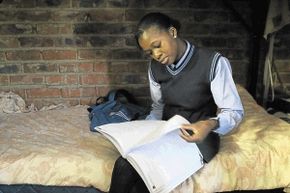 "Matric camp was hard but it was worth it"

PRECIOUS Matinise was in an intensive examination camp in Kameeldrift, north of Pretoria, for more than two days last week and missed her mother badly.
Matinise, a Grade 12 pupil at Makhosini High School in Soshanguve, is one of 563 pupils who have been at the study camp in Kameeldrift.
There were 500 girls and 63 boys at the Woord in Aksie camp site when Sowetan visited. The camp is specifically for girls, but boys were accommodated because the boys’ camps in Brits were full.
Pupils and teachers were housed in dormitories and all costs were carried by the Gauteng department of education.
The department spent R425,000 on the camps.
Matinise said: “I miss my mother so much, but the camp is very helpful.”
She said she wanted to be a pilot and was in the camp to improve her maths, physical science, life science and geography.
District official Modise Mongae said: “When you get here, don’t call mommy, don’t call daddy. It’ll be hard, but worth it.”
Four groups of 500 matrics had been accommodated at the camp for two-and-a-half days each since October 7.
They were being drilled in maths, physical science, accounting, economics, life science and geography marks.
The classes started at 8.30am and ended at 10pm.
The pupils were selected from schools in the Tshwane area.
The department was targeting pupils with a pass rate between levels one and four – one being the lowest pass rate.
They were pupils who were struggling with certain subjects. They were taught by the best performing teachers in Tshwane. – [email protected]
Article Source; http://www.sowetanlive.co.za/news/2012/10/22/matric-camp-hard-but-it-was-worth-it