Language: Wash Your Mouth Out

Language: Wash Your Mouth Out

The F-word has become much more socially acceptable over the past two decades. Will the C-word follow in its path, asks Sarah Britten.
Bitter and blue. That’s the taste of the hard little pebble of Lux soap in my mouth, which my mother has grabbed from the edge of the basin, pausing briefly to wet it under the tap before rubbing it against my teeth. My incisors form a barrier between the soap and my protesting tongue and I’m weeping at the injustice of it all, even though I know exactly why I’m being punished. I’ve used a bad word and the consequence of that is having my mouth washed out with soap.
How things have changed. Back then, I didn’t even know of the existence of the F-word (though my younger brother, then around four, did cause a stir when he used it in front of a woman from church). Now, it is my favourite form of emotional release and hardly a day goes by when I don’t use it. In fact, I use words that are even worse, usually when somebody doesn’t indicate to turn left at a traffic circle. 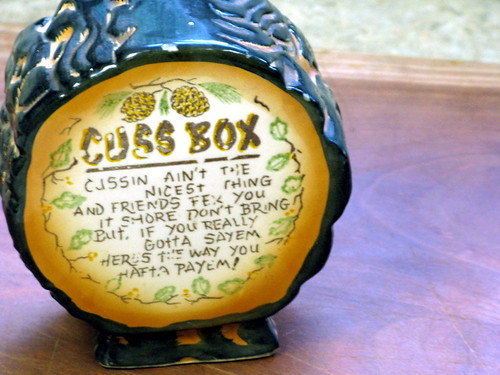 How did this happen?
I remember first using the F-word regularly when I went to university, but my diaries tell a different story, which is that it was my favourite adjective from the time that I arrived in Std 6 until the time I left school. The F-word was deliciously subversive back then. I was careful about using it within earshot of my parents though, and it was only in the winter of 1994 – when I drove a 1986 Corolla automatic which routinely failed to start in the frosty Joburg mornings – that my standards of linguistic decorum plummeted, never to recover.
In many ways my discovery of the joys of using the F-word reflects that of the country as a whole. The shift in South Africa’s culture of swearing, or at least in what is considered publicly acceptable, has been remarkable. While any conscript called up for national service would have learned more colourful invective than they could have imagined, rude words were only acceptable around the braai, behind the closed gate and on the other side of the wall. In public, we maintained a level of politesse.
After 1990, apartheid-era censorship rules relaxed and it was possible to hear forbidden words in movies and TV shows. Virtually overnight, racism and homophobia became officially unacceptable, while the opposite happened to sex and swearing. Where once the K-word was everywhere and the F-word unheard, now the F-word was everywhere and the K-word forbidden. (Like many English-speaking South African kids, I grew up using the word “d**s” without having a clue about what it actually meant.)
So as I was leaving school and discovering the greater freedoms offered at varsity, public culture was also undergoing a major shift. It was a perfect semantic storm. Later, when I started working, I happened to join an industry where nobody blinks at the use of four-letter words in conversation and where, for some, the F-word forms a sort of linguistic glue that holds their scattered thoughts together. Though I have spent time with corporate clients, I have never actually worked in an environment in which expletives were considered anything but an integral part of day-to-day business.
The F-word has long since become so established that it hardly seems shocking anymore. Could it be possible then, that another barrier be surmounted and another word – the worst four-letter word of all – finally begins to enter mainstream use? The other day I had a business meeting in which the other party – someone I didn’t know particularly well – used the C-word.
A couple of my friends have started using it with gay abandon. Now I’m seeing it in my Twitter feed, sometimes spelled out in capital letters, sometimes mashed up with other words to form lurid new compound adjectives. Some of the people who use it with the most enthusiasm are reasonably prominent female figures in the media.
I’m intrigued; also somewhat disconcerted because the C-word is surely the final frontier. I spent most of my childhood in blissful ignorance of it, and I certainly never tasted Lux for using it. In fact, it barely registered until I was in my early 30s. That was when I became more aware of its existence, and the more aware I became, the more it suggested itself as an appropriate descriptor of half of the other motorists on the road. It is road rage that, more than any other factor, has led me down a path to ever more extreme epithets – even if I use these words when I am alone, and nobody else is any the wiser.
But social media makes visible all of those little things we say every day. Comments made in passing now get cached as tweets and I wonder how much of an impact this will have on the public culture of swearing in South Africa. Hearing a word is not quite the same as seeing it spelled out, and it has struck me that, along with the F-word, the C-word is appearing so frequently that it will reach a point where I’ll hardly notice it. And it’s difficult to feel quite so offended by something when: a) you see it all the time; b) you use it frequently, even if it is within the hermetically sealed confines of your car, and c) nobody seems too fussed about it.
Where to from here? Based on the increasing public acceptability of the F-word, I expect that the C-word will eventually follow in its wake. When even News24 no longer bothers to put asterisks in words such as “d**s” and “p**s” when it translates stories from Beeld, you know that our attitude to four-letter words has shifted in some fundamental way.
So, I have to wonder: when all our bad words have been neutered, where will we find new ones? Will the pendulum swing back, despite the great tidal surge in the other direction?
Perhaps society needs to have its collective mouth washed out with soap once more.
Article by Times LIVE
​
article |
Previous