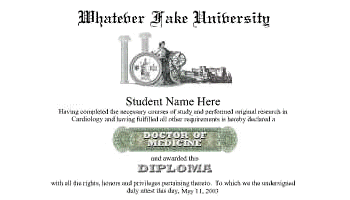 A Google search of “life experience degree” will introduce you to thousands of degree mills. For US$200-$500 you can turn your life experience into a qualification of your choice.
Why spend years studying for a degree when you can get one from a degree mill?
That question came to the fore recently in the furore over the doctorate Tshwane University of Technology vice-chancellor Prof Johnny Molefe obtained from St George University International. The university is not an accredited institution, which Molefe says he did not realise. That would make the degree merely invalid as opposed to fraudulent, which it would have been had he claimed it was from an accredited university.

A Google search of “life experience degree” will introduce you to thousands of degree mills. For US$200-$500 you can turn your life experience into a qualification of your choice.
“This is a big issue,” says Ethics Monitor MD Cynthia Schoeman. It’s one of a myriad workplace lies. She started looking into the subject of false qualifications when she received phone calls for references for people claiming to have worked for her previous company, now deregistered . “As a deregistered company it would seem safe to use,” she says.
Of the 30000 background checks carried out every month by commercial background screening company MIE, 10% have “something wrong with them”, says chief information officer Leon Smith. They range from a “white lie”, such as claiming an A instead of a C on your matric certificate, to forging pieces of paper. “This is outright fraud,” he says.
People are generally lying more about postgraduate degrees than undergraduate ones, he says. It’s mostly people in their mid-30s who are upwardly mobile and may be going for a promotion .
Schoeman says it comes down to a lack of ethical awareness and is perhaps explained by competition for jobs. “There needs to be verification of qualifications .”
Because buying a degree from a degree mill is not fraudulent but invalid, degree mills are “ the hot thing at the moment . It’s a murky area legally,” says Smith.
Unisa, the University of Pretoria, the University of Johannesburg and the University of Cape Town have all made it clear that they will prosecute people who falsely claim to have degrees issued by their institutions.
Article by FM.co.za

Get a Job This Youth-Month with the NYDA