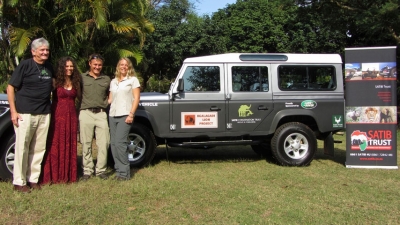 A ground-breaking project that will reveal critical information on the activities of the lion population in the Kgalagadi Transfrontier Park has been boosted with the donation of a brand new research vehicle.

Husband and wife team, Maya and Otto Beukes, are spearheading the Kgalagadi Lion Project, a collaboration between CPUT and the South African National Parks (SANParks). The project forms part of their Masters research in the field of Nature Conservation.

The Land Rover Defender sponsored by Land Rover South Africa in partnership with the SATIB Conservation Trust, will act as a base from which to locate and observe lions across the approximately 1.5 million hectare study area. The duo covers an average distance of 2500 kilometres per month, of which a large part is rough terrain.

“The project has suffered numerous vehicle problems over the past year due to the fact that old vehicles were used,” says the couple.

“We are sincerely grateful that we now have a trustworthy vehicle that is up for the task! We can now breathe a huge sigh of relief and get cracking with the lion research with a renewed confidence.”

The project was initiated after a survey conducted in the park, which straddles the border between South Africa and Botswana, found a skewed sex ratio in favour of lion males which could result in a collapse of the park’s lion population. 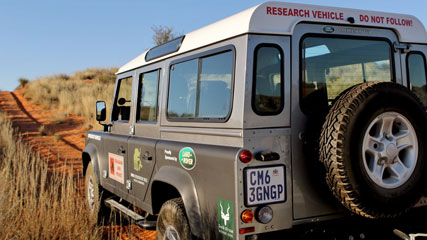 NEW WHEELS: Otto and Maya Beukes (right) along with the funders and their brand new research vehicle

Maya and Otto are responsible for conducting a detailed study on the lion population by collecting critical information on their demography and dietary patterns.

This information gathered will be used to help identify the cause of the sex skew and to inform management decisions on lion conservation in the Kgalagadi Transfrontier Park.

The couple has been working in the park since 2013 and has already collected a significant amount of data.

The project will run over a two year period and is being supervised by CPUT’s Dr Frans Radloff and SANParks’s Dr Sam Ferreira.

If you would like to find out more about the project, please contact Maya or Otto Beukes at [email protected]

You can also find updates on the Kgalagadi Lion Project on www.kalaharilions.co.za

Article issued by CPUT. To view their profile on SAstudy, click here.