Two or three years ago my friends and I would use twitter almost like a group message. You could “name drop”, vent about fights with friends, talk about cute boys who texted you, etc. Times have changed, and the twitter phenomenon has noticeably inclined over the past year. In the past, Twitter was considered a website devoted to “Facebook statuses” used strictly by women and celebrities. However, now every guy around has a twitter and suddenly it’s gone from being “totally lame and just for chicks” to cool. Now that the demographic has changed and your ex-boyfriend is following you its time to update the way you use twitter. I’ll admit most of these come from personal experience, but #youliveandyoulearn, right? 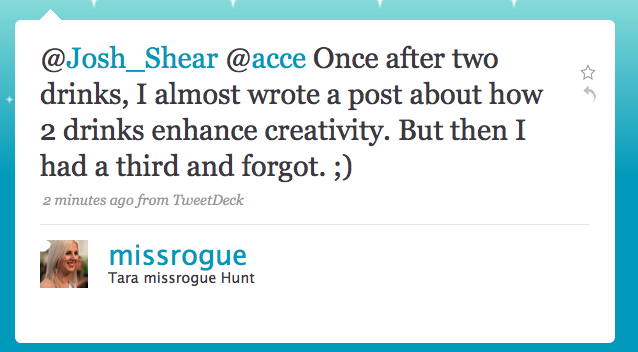 #DramaQueen: “Twitter” isn’t a synonym for “therapist”. If you’re that much of a mess, go get some help. Tweeting that you’re having a bad day is one thing, maybe a bird pooped on your head or you accidentally drunk texted your mother the night before. However, tweets that lead people to believe you need to be admitted to the coo-coo bin are another. Saying things like “Life isn’t worth living anymore without him” and “About ready to give up on everything #hatemyself” just makes everyone feel uncomfortable.

#ThugLife: Your harsh tweets don’t give you “street cred”. If you’re having problems with somebody or hate someone, go tell them. If you don’t want to tell them, go write it in a journal. Don’t say things like “about to drop kick the chick in front of me” or “this girl better watch her back”. Tweeting at someone is like punching yourself in the face, it doesn’t prove your strength it just proves your arrogance.

#CrazyExGirlfriend: Want your ex-boyfriend to want you back? The correct approach isn’t tweeting angst-y Taylor Swift lyrics. Guys like girls who are fun, independent, and not trying to burn their pictures. Don’t act surprised when he avoids you at all cost. Even if he’s not on twitter, all of his friends will tell him what you say about him. Trust me, all he’ll want from you is your signature on the restraining order.

#You’reNOTaCelebrity: Time to face the facts; you’re not an icon. All too often people tweet as if their every move is worth a million dollars. Nobody is concerned that you have a dentist appointment, and nobody cares that you had waffles for breakfast. If Megan Fox tweeted that she was having belgium waffles some people might actually care, they might even go out and buy a waffle maker. You on the other hand; get “unfollowed”.

#TwitterConversations: One of the most frustrating things is when people over use the mention option. Don’t make plans through twitter and don’t start having conversations. You have texting, so use it. Don’t tweet things like “@mackenzzz wanna hangout later?” What you think you’re going to be re-tweeted or something? You’re a waste of news-space.

#DrunkTweetz: After a few tequila shots it may seem like the next logical step to get your twitter on. While Jose Cuervo may suggest this is a good plan it actually isn’t. Regardless, #BlackoutBarbie will do as she pleases. It’s critical to do some damage control in the morning. Wake up and check your tweets before the entire world does, delete what needs to be deleted and formally apologize to your followers. Like many of you I am equally guilty of the “I’m Still so in love with him” tweets #patrone.

Article by Her Campus