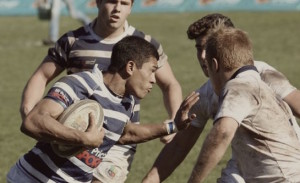 Two of South Africa’s oldest schools met in an FNB Classic Clash in Newlands on a magnificent winter’s day this weekend, and SACS beat Wynberg 22-5 to claim the Southern Suburbs ‘Triple Crown.

On this sparkling mid-morning, the day before mid-winter’s day, with Table Mountain and Devil’s Peak picked out against the bluest of skies Wynberg had a good first half, especially the second half of the first half, a half which ended 5-all.

SACS started well. They were much better at line-outs and it was at a won SACS line-out that hooker Lance Steytler burst though the midfield on a strong run. Then SACS won a tighthead and attacked untill Alex Halvorsen stretched out a long arm and scored in the left corner. SACS were leading 5-0 after 4 minutes.

SACS were now playing with confidence. They tapped a penalty and ran and then Athi Gazi counterattacked deep in his own territory, doing himself harm. He was tackled and penalised and then taken off in agony on a stretcher. Leon Abrahams came on as a substitute.

Now Wynberg had a good passage of play. They kicked the penalty against Gazi out for a five-metre line-out on their left. They then executed  a well-practised move perfectly.  The front player in the line-out, prop Romario Henriques, stood firm while those behind shuffled back as if to receive the throw but hooker Christian Botha threw to Henriques who immediately passed to his right to eighthman Stephen Mathew who went straight through the gap behind Henriques and powered over for a try. 5-5 after 16 minutes.

SACS were penalised and again kicked out for a five-metre line-out. This time they were more conventional and went for the line but yielded possession to a SACS scrum, from which Ciaran Dayaram broke powerfully and the next thing SACS were racing down the left side of the field up as far as the half-way line. Halvorsen and scrumhalf Rua-Ees Arendse had good breaks, untill the half ended at 5-5.

From a defensive scrum, right wing Tumi Magoje had a great run down the right and then SACS worked the ball wide left where Halvorsen was close to scoring his second. Wynberg were penalised five metres from the their line and SACS flank Liam Larkan, tapped and forced his way past three defenders to score a try which flyhalf Jordan Chait of the long boot converted. 12-5 after 39 minutes.

Wynberg missed a straightforward penalty, which seemed to lift SACS’s spirits and dampen those of the visitors. SACS lock Tommy Posen had a long run and only a knock-on prevented a try. But Chait goaled an easy penalty. 15-5. Then came a brilliant try.

SACS were just outside their 22 when Chait chipped, chased and caught the ball. He handed off strongly and then off loaded to Kyle Boyd who raced unhampered some 40 metres to score under the posts. 22-5 with six minutes to play.

SACS were delighted but their manners kept them composed as captain Chait went to thank the referee and the players thanked each other – a refreshing change for the hugging and dancing that often accompanies the final whistle.