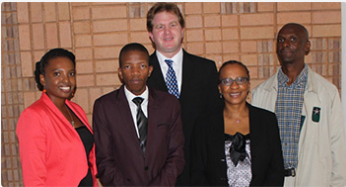 The Unisa Graduate School of Business Leadership (SBL) launched its first ever academic scholarship in 2012. The Judge Bernard Makgabo Ngoepe Academic Scholarship, named in honour of the Unisa Chancellor, was established to enable brilliant but needy students to pursue or complete their studies at the SBL.

The scholarship affords the SBL the opportunity to contribute and empower emerging leaders to hone their skills and be able to answer the call of our current socio-economic challenges by providing needy South African students with the means to attain a Master of Business Administration (MBA), Master of Business Leadership (MBL) or Doctor of Business Leadership (DBL) at the Unisa SBL. The scholarship pays all tuition fees for one academic year and is awarded to students based on their academic performance and other requirements.

In the 2013 academic year, eleven students registered for MBL (II and III) as well as MBA (II and III) were awarded the Judge Bernard Makgabo Ngoepe Academic Scholarship.

For the 2014 academic year, the SBL awarded six bursaries, five to MBL III students and one bursary to an MBL II student. Says MBL III student, Andrew Leibowitz, bursary recipient, at the handover ceremony: “I am extremely grateful to the SBL for affording me the opportunity to continue with my studies. Out of all the things I have learned in my MBL degree so far, perhaps the most valuable lesson was one that does not come from a textbook. That is that responsibility is a privilege and should be seen as an opportunity for growth and self expression. Respect for my teammates in my study group as well as self-discipline have been the cornerstones of my approach and the foundation of my success.”

The SBL prides itself as the only business school in South Africa that graduates the largest number of students in the MBA and MBL programmes annually and thus contributing enormously to alleviate the skills shortage in this country.