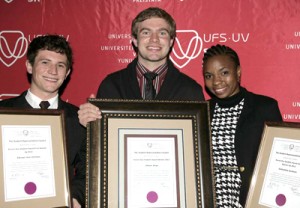 The most talented students of the Bloemfontein Campus have been announced.

Johann Steyn, a final-year LLB student and SRC member, was named as the SRC Dux Student for 2013. He and seven other students were recognised for their academic achievement and participation in extracurricular activities.

The SRC Dux Student Award is granted to a final-year undergraduate student who has demonstrated excellence in academic achievement, co-curricular and community involvement, and student leadership.